Kerala Murals have always fascinated me. They make me think of dimly lit temple walls, bathed in hushed shades of ochre. Each wall seems to come to life with the grandeur of this art. Each   masterly stroke spins tales of celestial charm. I often  find myself wondering at the unsung genius of such artistry.

So when Catterfly announced the Kerala Mural session,   I really got  tempted  to join it. But I was a little hesitant too.  I felt somewhat daunted by the complexity of this art form. As I mulled over the matter, Catterfly came up with the mini series in Kerala Murals, where we would start off with a smaller, less intricate motif before moving on to more elaborate designs. It provided the perfect way out of my dilemma and I grabbed the opportunity at once.

Our teacher was Saju, a young and talented artist, a past master in his art. He spoke only Malyalam, a language quite alien to many of us in the session. That, however,  posed no problem whatsoever. We were in the capable hands of Zeena ji, our moderator for the session, who  took great pains to ensure that we understood exactly what Saju was trying to convey.

Each day  I  watched with rapt attention as he showed us how to work our way through the various stages of the painting process. He took us step by step through the elaborate and distinctive style of layering, so typical of Kerala Murals.

As the session progressed, I became increasingly aware of something else quite unique. I couldn’t help noticing  how well Saju managed to communicate each and every nuance of his technique to us. He did it in a simple demonstrative way that made words quite unnecessary. For instance, he showed us how to mix colours in the correct proportion, simply by drawing lines. The length of each line told us the ratio in which the colour was to be added. There it was! Crystal clear! No language required!

Then, there were those tree leaves , gently swaying in the breeze. They looked misleadingly simple, but we all met our Waterloo in them. He patiently drew them over and over again on a rough paper, trying to explain to us how to draw the correct shape. He then picked up his pencil and pointed to the tip of the pencil.  He showed us how to use that pencil tip as a measure to get the curve right. And there it was ! Clear as daylight! Not a word required, yet again!  I was struck by the eloquence with which he made words redundant.

Saju wove his web of wizardry over five exciting days. Each day I sat sipping my steaming hot cup of coffee, as layer after  layer of subtle shades merged into a sublime harmony of hues.

The session drew to an end, and I continued to marvel  at how language had ceased to be a barrier between us. As our proud and pretty peacock emerged, resplendent in its colourful vibrance .  I realized in my heart, that the beauty lay as much, in the breaking of the  barriers. 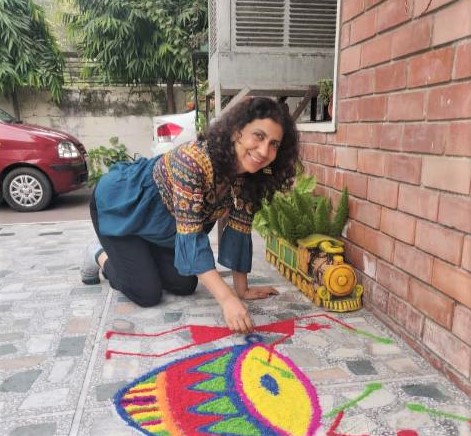